Core Specialty: Validus reincarnated as a US specialty insurance company

Jeff Consolino and Ed Noonan want to take the attitude, culture and philosophy that powered Validus and apply them in a new context to make new launch Core Specialty the "greatest specialty insurance company in the US market".

Speaking to Inside P&C, the two executives repeatedly anchored their thinking around their new venture to what had driven success at Validus, a business that earned early investors 5x-6x their money by the time it was sold to AIG in 2018 for $5.6bn at a valuation of 1.8x tangible book.

"Validus was a fantastic experience – we accomplished so much with the business," Consolino told this publication. "What motivates us is the chance to do it again – albeit in a different form and with a different focus."

The former Validus president and CFO, who then was AFG CFO for eight years, was speaking after the $900mn recapitalization of StarStone US closed after markets yesterday, paving the way for its relaunch as Core Specialty.

This time the founding executive team at serial acquirer Validus are in different seats, with Consolino – then president and CFO – now taking the reins as president and CEO, while Validus chairman and CEO Ed Noonan is working in the guise of executive chairman. 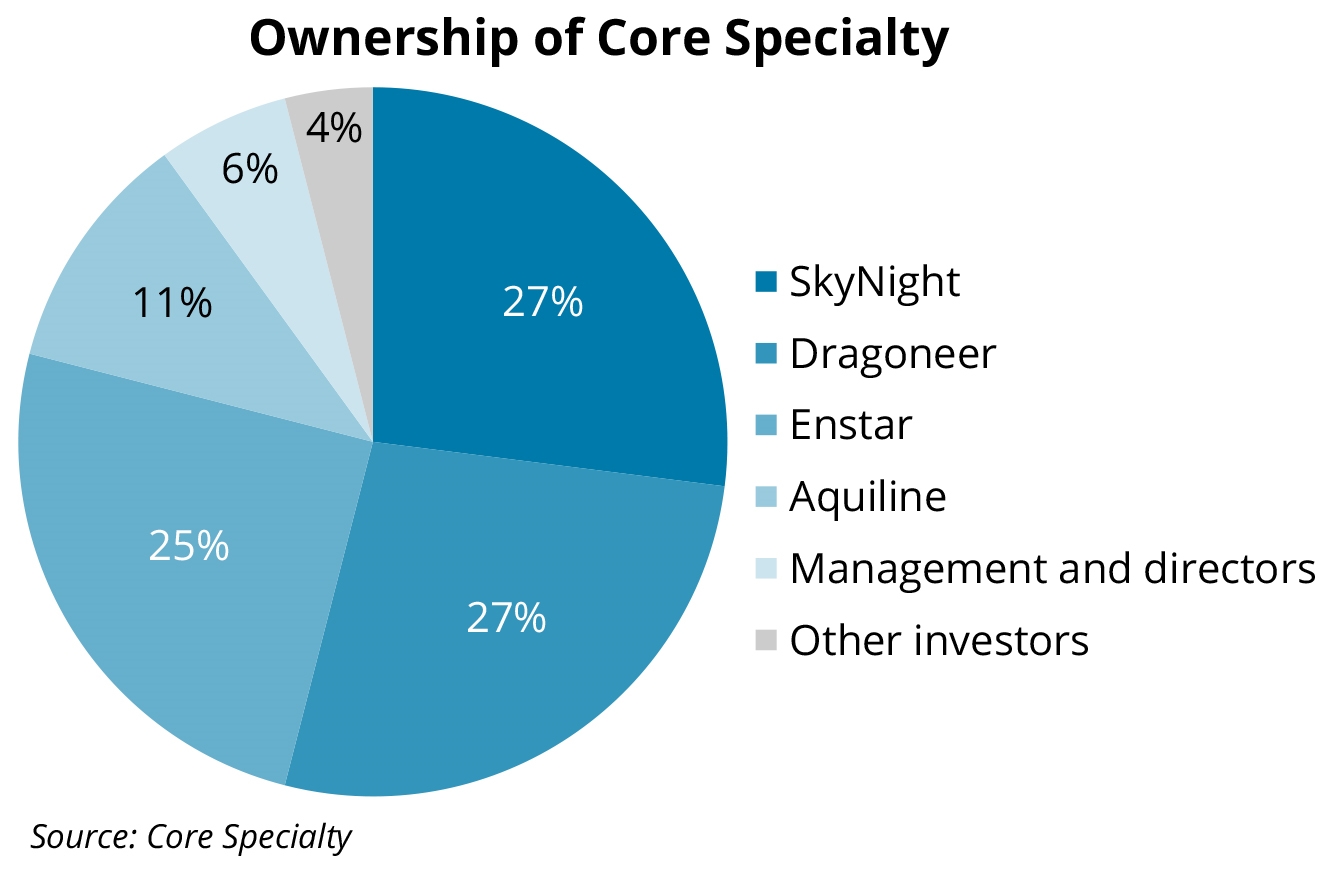 The formal launch, which follows months of pre-closing work, comes against a backdrop of significant interest in the US E&S market from private equity capital keen to capitalize on the twin tail winds of rapidly rising rates and increased submission flow.

In addressing what distinguished Validus, Consolino said: "The company's success was really down to the attitude of 'anything can be done'. We acted with celerity, we acted decisively," pointing to its rapid move to acquire Talbot ahead of other Bermudians, willingness to pursue unsolicited takeovers and its swift progress to an IPO that allowed it to get ahead of the financial crisis.

Noonan said the philosophy also stressed the importance of hiring the right talent, completely aligning it to shareholders and then challenging unit leaders on their business plan before allowing them to execute without being second-guessed.

"We also embedded from day one that the sole purpose of an insurance company is to make underwriting profit," he noted. "So if you're not getting paid to take the risk, you put your pen down."

Consolino added that at Validus they looked for inspiration to leading Bermudian RenaissanceRe, and then set out to eclipse what it had achieved.

"Now we look in the same way at companies like WR Berkley, American Financial Group, Markel and RLI – and we make no apology for setting out to emulate them" he said.

"We admire these companies for their underwriting cultures, longevity and success in compounding their capital. Our goal is to be the very best primary specialty insurance business there is."

Consolino also stressed the importance of the "architecture" of the business, and specifically what he described as its "business unit philosophy".

The Core CEO stressed that a central tenet of the business was empowering the leaders of the firm's business units, allowing them to set a go-to-market strategy, make key decisions around distribution and determine reinsurance buying.

Oversight will be exercised through business plan scrutiny, with alignment around targets based on delivering strong accident-year underwriting results and a target return on capital for shareholders.

Questioned about parallels in the market with the likes of WR Berkley, Consolino said the model "is consistent with how some other companies including AFG and Berkley run their businesses".

"We make no apology adapting those things that we think are good, appropriate and positive in other people's businesses. But this isn't new – it's also effectively how Validus was run, but with a different business unit configuration."

Post-close, Core Specialty has over $900mn of equity capital and writes around $450mn of business. Pressed on whether the business had critical mass on scale, Consolino replied: "There is a great body of work for commercial P&C that says there is no indication that scale corresponds with underwriting profitability."

He continued: "This is not a life insurance or auto insurance business where driving unit costs down is the most important success factor."

Consolino explained that the right size for business units is one where "you are large enough to make a difference, but not so large you are stuck with the market result".

Nevertheless, the Core CEO stressed that there was significant runway for growth for the business, with $900mn of capital relative to its premium base providing a "war chest" for growth.

He also pointed to scope for Core to move into new areas. "If you look at Berkley with over 50 niche businesses and Great American with 35 niche businesses – those are both rounded figures – we have a lot of room to add niches, and we are hard at work to do that."

StarStone US had five business units – excess casualty, workers’ comp, MPL, healthcare and marine – with a sixth created focusing on property under former Nephila underwriter Alison Oliphant since the recap was announced in June.

The inevitability of M&A

Validus won a reputation as the P&C player with the sharpest M&A strategy and execution, with six franchise-building acquisitions in 12 years before an expertly managed exit to AIG – and then there was its notorious break-up of the Allied World-TransRe deal, ahead of the reinsurer's ultimate acquisition by Alleghany. 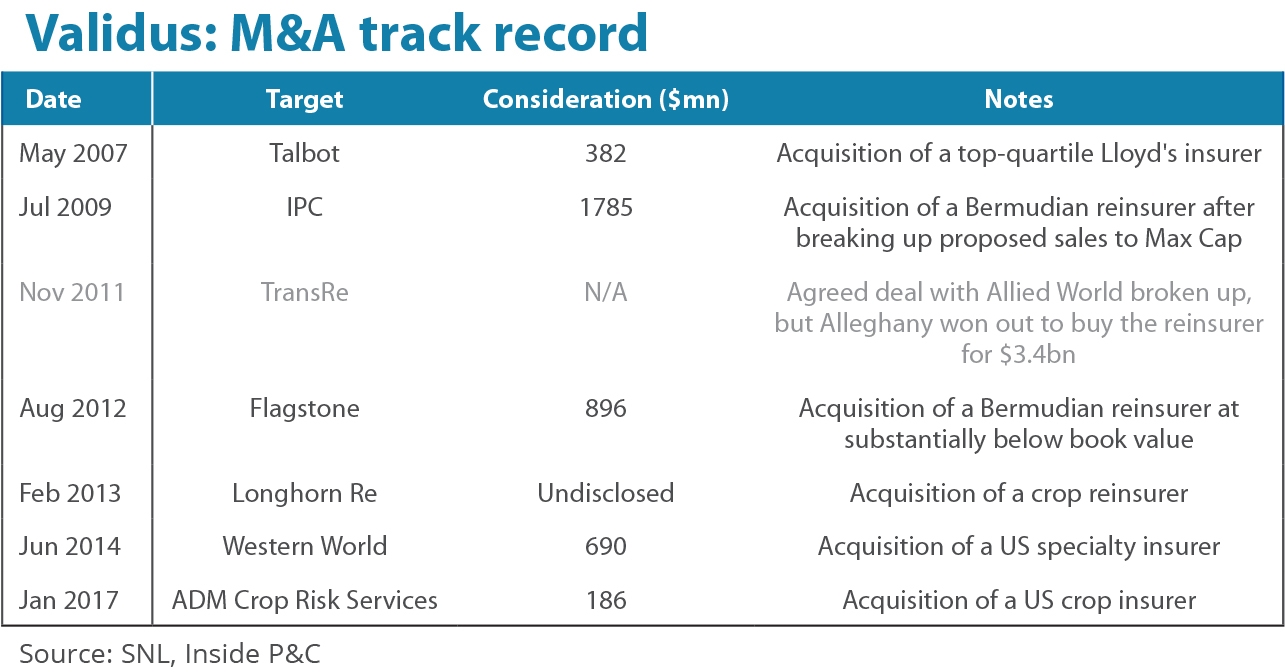 As well as the deal-making track record of the two executives at Validus, in a past life Consolino was a senior deal banker at what was then Merrill Lynch, and subsequently helped execute a number of deals at AFG including the well-timed move on workers' comp specialist Summit, as well as commercial auto deals National Interstate and Atlas.

Asked on the role which M&A will play in Core's future, Consolino said: "It's inevitable it is going to play a part in strategy – but we won’t be injudicious. We know that M&A is fraught with peril."

However, he stressed that 25% owner Enstar could help them to limit the reserving risk related to deals, and pointed to a sustained track record of successful execution.

"In an industry littered with terrible acquisitions, I think our track record is really second to none because I don't think you can find executives in this industry who have been as acquisitive as we have without stumbling," he said.

Perhaps reflecting the tendency to want to under-promise and over-deliver, which tends to characterize management communication around M&A, Noonan added that early deals were likely to be about adding "complementary pieces to our puzzle".

Enstar, which has effectively increased its investment via its swap deal with Stone Point, is likely to play an important role in deal origination with scope for the two to collaborate around transactions.

Consolino was also forthright in stressing that Core's future includes a listing, with such a move giving the company access to currency that can be used in M&A amongst other advantages.

"We want this company to be public when it makes sense," he said. "Ed and I both thrive in a public company environment."

An arms race on talent

But they emphasized the centrality of the composition of the board to their "arms race" on talent.

Former Great American president Don Larson and recently retired Everest Re group CEO Dom Addesso have both been named to the board. They join alongside long-time AmWins CEO Steve DeCarlo, the founders of PE backers SkyKnight (Matthew Ebbel) and Dragoneer (Marc Stad) and Aquiline's co-head of insurance Chris Watson, who helped found Validus. 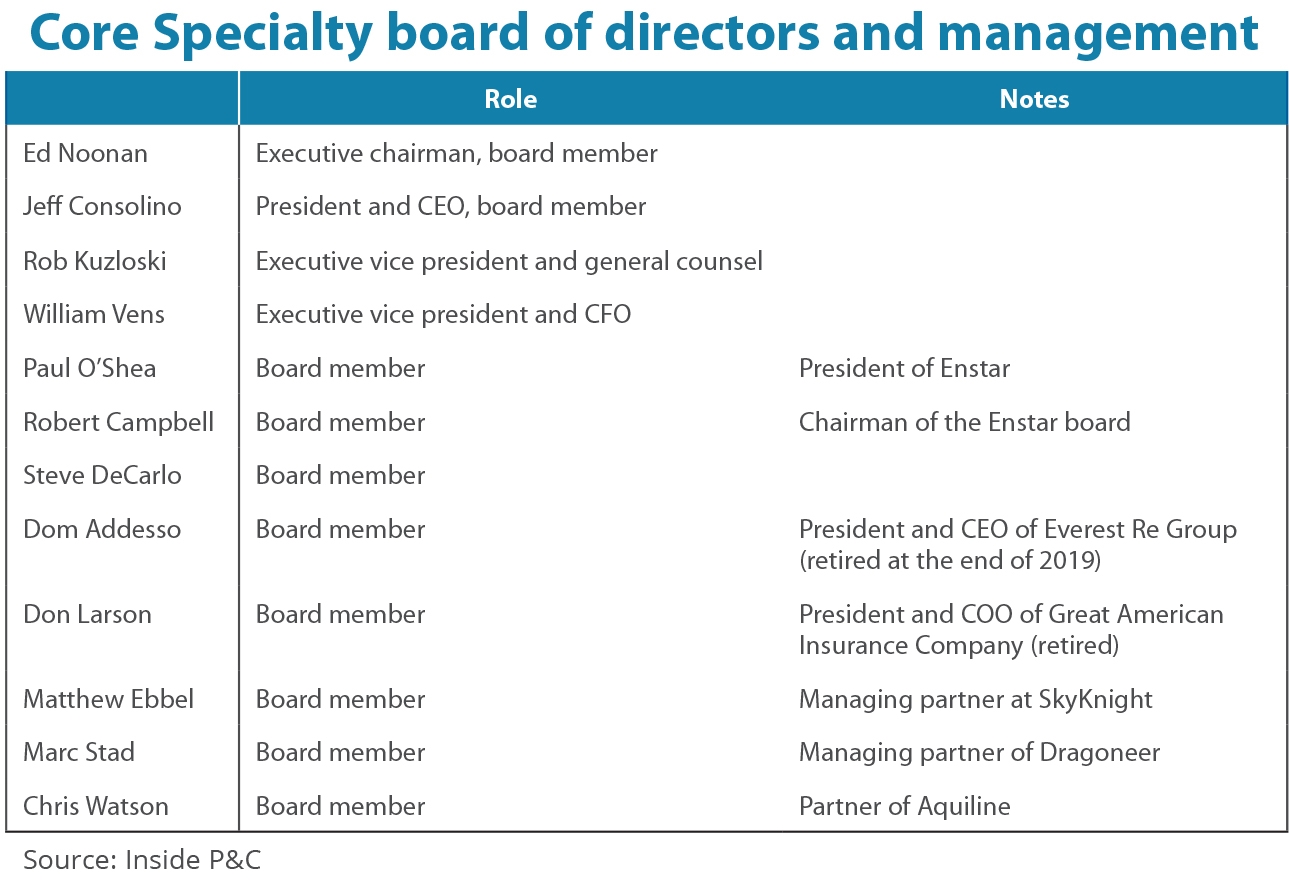 Consolino said this is about wanting to be surrounded by the smartest people, and argued that the quality of the board "can't really be matched anywhere", with every member of the board an experienced business builder.

Noonan said the board were not just dialling in for board meetings, stressing that they were helping to vet talent, actively identify opportunities and work on developing systems.

"It's day in day out – they are part of the circle of smart people trying to build a company," the former American Re CEO said.

Both Consolino and Noonan stressed that the platform which was being acquired was under-rated by the marketplace, with the former Validus CEO arguing that the US had been "overlooked" by others based on the issues with the international business.

Consolino pointed to the remedial work that had already been undertaken at StarStone during the recent period when former Validus executive John Hendrickson had been CEO and Noonan had briefly served as chairman, with another former colleague Robert Livingston running the US.

"The company already had a Validus imprint in its turnaround phase – a lot of the Validus diaspora was intensively involved in getting this right," he said, with this playing a role in pushing them towards pulling the trigger on this opportunity.

Consolino pointed to a nine-month combined ratio of 94% as evidence of the amount of ground made already on the turnaround.

Noonan said further progress has been made since June in reorientating the culture of the company.

"You can feel the culture changing," he noted. "Creating an environment of confidence is very important – just making people feel that management has their backs."

He added that some of what they were trying to do was as simple as people "getting more comfortable with it being fun".

"It's that 10 minutes of pointless digression in every call or Zoom meeting that helps people get comfortable and relaxed.”